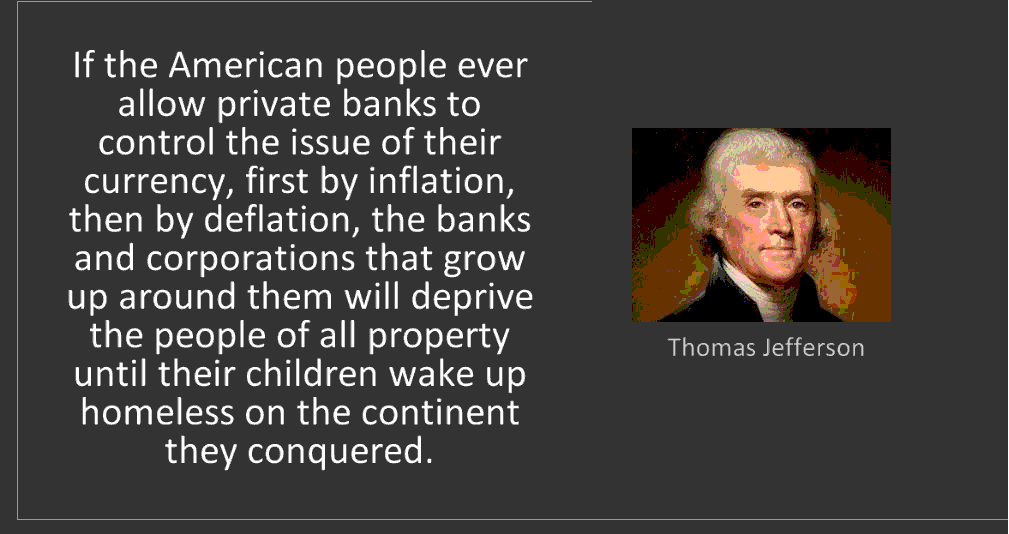 As the largest monetary expansion in history fails to contain the long-term debt cycle that ended in 2008 (see The 40-Year Market Distortion Unwind), while spurring unprecedented levels of moral hazard, the barely-hidden financial crisis stands as proof that Predator-Prey Resource Competition Dynamics governs mankind as it does all living things — regardless of the language constructs that power elites have been spinning over the ages. Ultimately, individual rights to property, mobility, and self-defense continue to be trampled under the 21st Century Schizoid Man’s Logic of Violence.

As the 21st Century approaches its first quarter end, it becomes ever more obvious that once the generation of US President Thomas Jefferson faded from the scene in the early 19th Century, neither “democracy” nor “individualism” had ever been truly guaranteed — and did not persist. In 1831, political philosopher Alexis de Tocqueville noted: “…having thus successively taken each member of the community in its powerful grasp and fashioned him at will, the supreme power then extends its arm over the whole community.” Two centuries later, his words resonate louder than ever to those of an independent mind, unshackled from the mainstream media.

Sadly, nearly a century before Jefferson’s monumental contribution to the world, the political-financial elite in England had already begun expanding unfunded credit cycles. Since 1694, the Bank of England (BOE) had been arbitrarily debasing its currency and expanding credit, knowing this would shock nominal prices higher. The BOE founders and their entourage quietly seized prime income-producing assets before real-economy asset-prices soared. Predictably, unlimited money expansion bumped up against physical inventory size, causing asset and commodity prices to soar — until aggregate demand collapsed and nominal prices crashed too. Regrettably, against Jefferson’s wishes, the BOE template — which bypassed democracy — was adopted in the USA, and the same happened. In fact, had it not been for the oil empire that made the US Dollar more dominant than Gold for several decades into the 20th Century, the expanding global adoption of the BOE template would long ago have taken G-7 nations to the dog-eat-dog world where Zimbabwe, Venezuela and other nations languish.

Unfortunately, the BOE template still prevails around the globe. Whatever actions are taken to neutralize it are almost always doomed to fail, as prescribed by the simplest differential equations ever devised: the Lotka–Volterra Predator-Prey equations, which prove why the linear-math models of Neoclassical Economics absolutely fail to describe the dynamics that govern human ecosystems. Only System Dynamics can fully validate the interactions that rule human economics and are intrinsic to all ecosystems (see Predator-Prey Economics). There is no better proof of this than the top chart, where the blue “Financial cycle” curve “kills” the red “Business cycle” curve, as the latter begins to dip irreversibly after 2008 — despite the titanic credit expansion by G-7 Central Banks to save Globally Systemically Important Banks (GSIBs), which have flooded the world in fiat currency and debt for the past 14 years. The GSIBs have used ploys straight out of the 1966 Report from Iron Mountain, which specifies, as a justification, using substitutes for war that must (1) be economically wasteful, (2) represent an apocalyptic threat, and (3) provide a credible excuse for making people serve the government’s will. What the “Iron Mountain” report written by James K. Galbraith and members of the think-tank predecessor of the WEF, failed to mention is that, except for scaring citizens into giving up their individual rights, wars rarely serve many other objectives. Instead, the most ruthless factions in a nation’s industrial-military complex are presented with a kaleidoscope of opportunities to encroach on the privacy and property rights of ordinary citizens for the sake of “national security.”

In conclusion, as the world reaches the end of the current long-term debt cycle and commodity purchases become unaffordable, regardless of how much domestic currency or sovereign debt G-7 economies issue, the global ratio of production versus consumption is likely to reverse, with interest rates moving towards their 5% nominal geometric-mean of 5,000 years. That will strip naked governments’ highly levered, illiquid and inefficient monetary scheming. Their four decades of interest rate distortion will likely not survive the onslaught of real interest rates and truly capitalist competition… Thank goodness!

Fortunately, as humanity faces the current cycle ending, we are the first generation to have access to a new monetary technology that can endure longer than ornamental rocks. Its name is Bitcoin, the only payment in specie ever invented to be impregnable to government decrees, counterfeiting, shipping blockades or the threat of violence.